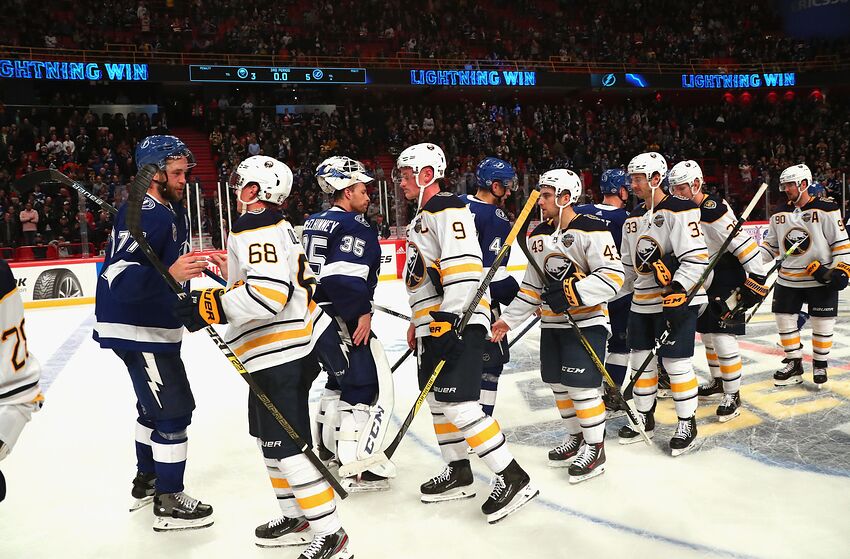 The Buffalo Sabres played the Tampa Bay Lightning in back to back games in Stockholm, Sweden. The results could have been better for the Sabres.

The Buffalo Sabres headed to Stockholm, Sweden with an excellent opportunity. Two games against the defending President’s Cup champions and a chance to make a statement in the Atlantic Division. Unfortunately what Sabres fans got was two close losses to a team that looked superior in both games.

Now the question for Buffalo is what now? After a hot start to the season, the team has been an abysmal 0-4-1 over their last 5 games and everything the team was doing well to begin the season, now looks like a weakness.

It all starts with the defensive pairings, earlier this season the Buffalo defense was one of the top units in the NHL. Now Rasmus Dahlin and company have struggled at the blue line and to be quite frank, they haven’t played with the same fire we saw in October.

In October this team played like a team on a mission. For 60 minutes the Sabres would play like their careers depended on the game they were playing. Now it feels like this team has gotten content, when the Sabres are on the ice there is no fire from this team.

If Ralph Krueger wants to right this ship, he’ll need to instill the same passion in the Sabres that he instilled in October. While some may argue this hard part of the schedule is why the Sabres have struggled, I don’t think that is a valid excuse. If you have a goal of being a playoff team, you have to beat other playoff teams.

No matter what the issue may be, hopefully Buffalo can get things on track and this isn’t another season of a hot start gone wrong.